What You Should Know About Attorney Objections

If you’ve ever watched a movie or TV show that has a legal scene, you’ve likely heard the term “objection” and a moment where the judge says “sustained” or “overruled.” If you’re not used to the legal system, this exchange can be confusing. Every court of law has a set of rules that must be followed, and if they aren’t, there must be a way to argue or point out the violation. In this article, we will explore why your attorney may have an objection and what that means.

What does it mean when my attorney has an objection? An objection is a formal protest raised during a trial or other legal procedure, that indicates the objecting attorney’s wishes for the judge or presiding legal officer to disallow testimony, evidence, or line of questioning that violates the rules of evidence or procedural law.

After an objection is raised, the judge must make a ruling, which is either “sustained” or “overruled,” and in response, the attorney must have a valid argument for their objection. There are several different objections and arguments to back them up that you may hear in a courtroom – which we’ll discuss next.

Why Would My Attorney Want to Object?

When evidence is given to the judge, it becomes part of the official court record and the judge and/or jury can consider it when deciding on the ruling of your case. A successful objection to evidence will prevent it from entering the record and it cannot be used when making a ruling.

Your attorney may want to object to evidence if it harms your case or if it follows a rule of evidence that says it should not be allowed. Objecting to evidence as it is presented to the court is important because it could help later if you choose to file an appeal.

Objecting to evidence or a line of questioning should always come with a valid argument. If your attorney objects, the judge can ask them their reasoning and rule based on their argument. This is why it is important to only object when it is needed – even if the judge denies it. And, this is why it is important to not submit too many objections, the judge/jury can get frustrated and start to not take the objections seriously.

How Do You Make An Objection? Each court of law follows “rules of evidence” that guide a variety of different things. One of those rules of evidence regards the kind of objections you can make. To object, you have to say “objection” as soon as you hear something objectionable.

Standing up when you object may help get the judge’s attention and can help pause the trial before they admit something into evidence.

Oftentimes, the judge will ask you what the basis is for your objection, and you/your attorney must be prepared to answer based on the rules of evidence. The judge will then rule:

So now that you know how an objection is made, let’s talk about the common types of objections you may hear.

Though there are many different reasons for objecting, there are 12 that are the most common and likely to be heard in a court of law.

When the opposing party is asking cross-examination questions and begins to argue with the witness, also known as “badgering the witness,” the other party can object to the line of questioning as being argumentative.

If your attorney believes that a piece of evidence has nothing to do with the case, they can object to the relevance of the evidence and whether or not it has any importance in determining the outcome of the case.

During direct examination, if the other party poses a question that leads the witness to a certain answer, usually “yes” or “no” – you can object on the basis of a leading question. Some background information may be leading and is allowed to move testimony faster, but with issues related directly to the case, leading questions are not allowed. Witnesses that are not considered by the court to be “expert witnesses” cannot respond with their opinion. An expert witness who has been chosen to testify for medical, technical, or other such reasons may provide their professional opinion to the court and it may not be objectionable.

A compound question is when two or more questions are combined into one; they are objectionable because they can confuse the witness, judge, and the jury and it may not be clear in the court record which question the witness is answering.

If a witness testifies about a fact and does not know whether that fact is true, the testimony is objectionable – they must have personal knowledge of a fact to testify about it; any question that can only be answered by speculation is also objectionable.

Sometimes, attorneys will attempt to coerce a certain answer from either their witness, or the opposing witness by asking the same question in various forms; once a question has been asked, and answered, it cannot be asked again and further attempts to ask the question are objectionable.

If any evidence would unfairly turn the judge or jury against your party, you can object to the question or evidence based on the prejudicial argument.

Vague questions that make it difficult to tell what the question is about are objectionable and should be objected to so that your witness doesn’t provide more information that could be incriminating; the person asking the question may be allowed to rephrase the question so that it is more specific.

If a witness begins to respond to a question with information unrelated to the question, you can object to it as being “non-responsive” and the judge can rule for the witness to answer the question.

Why Objecting Is Important Objections are extremely important to the outcome of cases because they can be used in future appeals should you lose. In legal proceedings, a court reporter records every word spoken. This is why your attorney may object to evidence, even if they know the judge will overrule them.

If you choose to file an appeal, it can be appealed based on the fact that the judge permitted evidence that was objected to.

In the same way, you can file an appeal based on the fact that the judge did not permit certain evidence based on the opposing party’s objection.

Being in an environment like the courtroom as a witness can be overwhelming. Because of this, your attorney may object to certain questions during your testimony if they can see you are getting flustered. This can help you regroup and calm down so you can continue.

Your legal professional needs to have an actual reason behind the objection because a judge may begin to grow frustrated or unbelieving if there are too many.

What Does It Mean for the Record When a Judge Rules “Sustained” or “Overruled”?

Once the judge makes a ruling of an objection as “sustained”, the attorney who asked the question is not permitted to ask that question. The judge has determined that the objection was valid. If the witness has already answered the question, or answers anyways, the judge may say to strike the answer from the record. Striking from the record means the entire cause of action must be removed from the court record.

It is important to note that even though a judge may say to strike an answer from the record, both the judge and the jury have already heard the answer, and though they are not supposed to make a decision based on that answer, it is difficult to ignore it.

When an objection is overruled, it means the judge has determined that the objection was not valid and the question may stand – the witness must then answer the question. This means that the line of questioning may continue as though the objection never occurred. 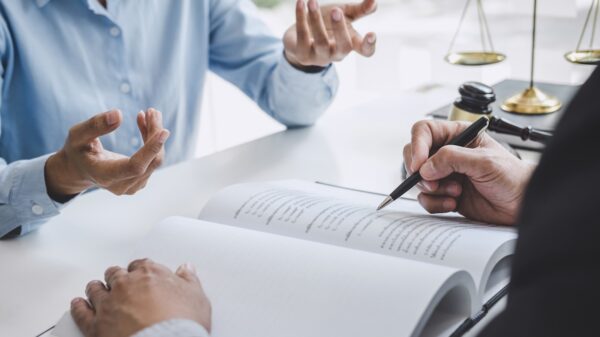 A Good Lawyer-Client Relationship Is Essential When it comes to hiring dedicated legal help, both the lawyer and the client need to have an...